People have been complaining that rounded rectangles in Chrome aren't anti-aliased. If you're a web developer, it seems that this is a Big Deal.

The issue is that almost anything can have rounded corners in WebKit. There's not a drawRoundedRectangle function, instead, clipping paths are created and then normal drawing proceeds. On Safari (which is also WebKit, but sitting on top of the CoreGraphics library), clipping to a path is anti-aliased and everything looks pretty. However, Chrome's graphics library, Skia, doesn't do anti-aliased clipping for a good reason.

Consider the figure below: 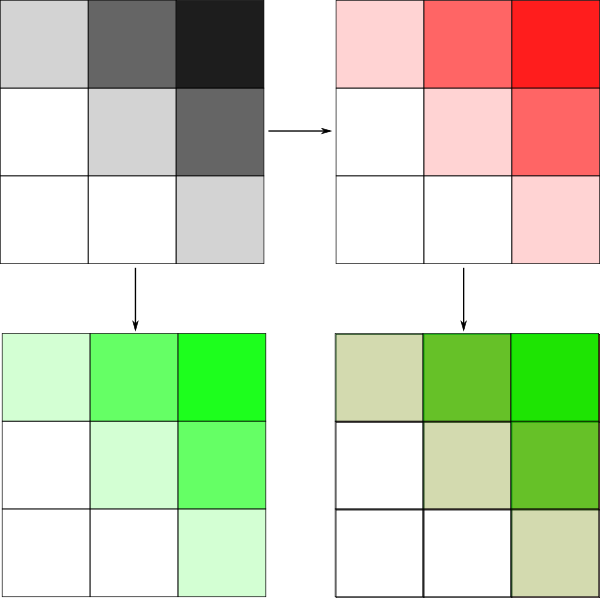 However, consider what happens when we first fill with red (top right) and then with green (bottom right). We would expect that the result would be the same as filling with green - the second fill should cover the first. But for pixels which are fractionally covered by clipping region, this isn't the case.

The first fill, with red, works correctly as detailed above. But when we come to do the second fill, the background_color isn't the original background color, but the slightly red color resulting from the first fill. Both CoreGraphics and Firefox's <canvas> have this bug.

It might seem trivial, but if you end up covering anti-aliased clipping regions multiple times you end up with unsightly borders around the clip paths. This is why Skia only supports 1-bit clip paths.

The correct way to do anti-aliased clipping is to draw to a layer, on top of the original bitmap, and, when the clipping path is popped from the clip stack, erase outside of the path (anti-aliased) and composite the result onto the underlying bitmap.

This works just fine, the problem is that <canvas> users don't always pop the clip stack. They expect to be able to set a clipping path, draw and have it appear without managing a stack. We could collapse the clipping stack for them when we paint to the screen, but then we need to restore it afterwards, which would require major surgery to Skia.

The second problem with anti-aliasing, even when done correctly, is that it makes it impossible to put polygons next to each other. Try this demo in Firefox and note the hairlines caused by anti-aliasing.

I think what Chrome will end up doing is to anti-alias the clipping paths (correctly) for everything except <canvas>. This isn't a great solution, but it's better than what we have now.