What I'm looking for is a quote from Zooko about why any kind of preemptive or co-operative threading model is unsettling. I can't find one so I'm going to make it up:

I don't like it because I can never be sure, from line to line, that the world hasn't just changed behind my back. -- not zooko

Which is true; tragically so in preemptive systems and enough to keep you on your feet in syncthreaded (co-operative) ones. I've long said that it's far too easy to screwup preemptive multithreading with its locks, deadlocks, livelocks and super-intelligent-shade-of-the-colour-blue locks. Syncthreading quietens down things enough for me and yet lets you keep the same flow-of-control.

(I like the flow-of-control. Fully asynchronous code with huge state-machines is a mess.)

But I've just dumped syncthreading for an actors model in my current project - mostly for non-concurrency related reasons. (And certainly not because I have a compulsive disorder which causes me to dump and rewrite any code which is starting to work 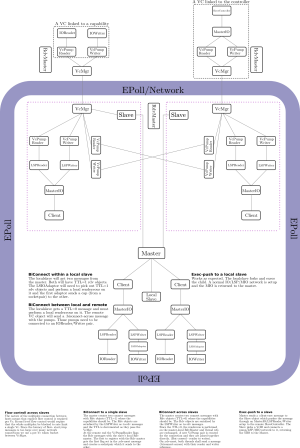 An actors model involves many threads co-operating via copy-everything message passing. It's an asynchronous pi-calculus if you like that sort of thing (which I don't). Copy-everything means no shared data and no locks. At all.

The majority of threads are short classes (a couple of pages of Python) with a simple specification. They are nearly all small state-machines which return to the same point after each message. There's a single blocking function - recv which gets the next message.

You break up threads in much the same way you break up functions. You get a feel for how much complexity should be contained in each one. The diagram on the right is taken from my project report at the moment - each block is an actor (and a single class) and they exchange messages with the other blocks that they're connected to. It may look a little complex, but that's smaller than the class inheritance diagrams in many systems.

Any the reasons for choosing it over syncthreading are a little odd for a concurrency model: modularity and unit testing.

I like unit tests. I don't think there's a whole lot of disagreement about their utility so I'm going to leave it at this: unit tests good.

It's always good and easy to write unit tests for some things - data structures are prime choice. Lots of scope for silly errors and no side effects. You can write a good data-structure unit test and feel good about yourself.

It's side effects which make unit tests difficult to write. If your code interacts with the outside world, bets are your unit tests are limited.

And that's the wonderful thing about actors - almost nothing interacts with anything else directly. It's all via message passing and that's eminently controllable by unit tests. If you want to test your timeout logic in a unit test it's not a problem. Timeouts are just messages like anything else and you can sent them in any order you choose.

Likewise I'm fairly sure that the code ends up being naturally more reusable. For all the same reasons; a lack of direct external dependencies.

My design is mostly taken from Erlang. There are a lot of links in the C2 wiki page but there was a very good talk about Erlang at the LL2 conference and they recorded it. It's real-media but mplayer copes with it for me.